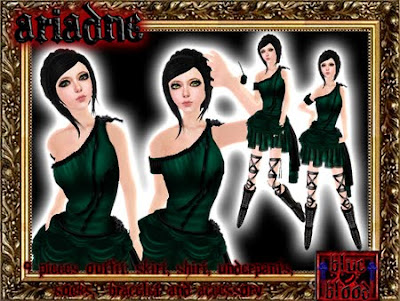 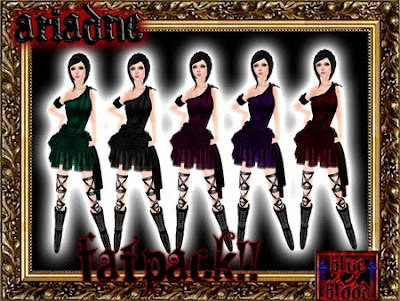 
Ariadne was daughter of King Minos of Crete and his queen and eventyually became the wife of the god Dionysus.
Since ancient Greek legends were passed down through oral tradition, many variations of this and other myths exist. According to one version of the legend, Minos attacked Athens after his son was killed there. The Athenians asked for terms, and were required to sacrifice seven young men and seven maidens every nine years to the Minotaur. One year, the sacrificial party included Theseus, a young man who volunteered to come and kill the Minotaur. Ariadne fell in love at first sight, and helped him by giving him a sword and a ball of red fleece thread that she was spinning, so that he could find his way out of the Minotaur's labyrinth.


I just wanted to add this so that you could see why the dress has a Greek touch, and a string that attachs to the hand.

Ariadne is the name of the new Blue Blood outfit. Based on a Greek myth, Ariadne is an elegant female outfit, sexy, mediterranean, with a touch of goth. It's not the usual style I work with, so it was definitely fun to create and a real challenge :) I hope you like it :)

as discounts go, the group gets the fatpack at 50% discount, and of course there is a group only color, which is pink *^__^*

you can get them at +++Blue Blood+++ Main store

+++BLUE BLOOD SL FASHION+++ is dedicated to the creation of SL content for in-world use and is NOT associated in any way to any other brand or product including the words "Blue Blood" on it or is endorsed by them.